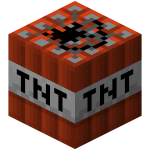 Once activated, TNT turns into an entity. It is spawned at the center (+0.5,+0.5,+0.5) of a powered TNT block, while itself is a cube with an edge length of 0.98. Its fuse lasts 40 redstone ticks (4 seconds/80 game ticks) if activated by redstone Redstone Transparency Yes Luminance No Blast resistance 0 Tool Any tool Renewable Yes Stackable Yes (64) Flammable No Availability Survival Drops Redstone (1) Data values See Data values Name See Data values This article is

, or a random number between 10 to 30 game ticks (0.5 to 1.5 seconds) if it`s destroyed by an explosion A TNT explosion. An explosion is a physical event, generally destructive, that can be caused by several different circumstances. It can destroy nearby blocks, propel and damage nearby players, entities, and their armor, and cause

Primed TNT`s texture blinks, with its texture alternating between its standard texture and a pure white texture. The texture will blink at a rate of 2 times per second.

Once spawned, primed TNT is given a vertical velocity of 0.2⃂m/tick, and a horizontal velocity of 0.02⃂m/tick in a random direction. If it does not collide with another block, it will travel 0.166m horizontally on flat ground before it stops. When the countdown timer expires, the TNT explodes. When unsupported, it will fall 77 blocks before exploding. The explosion has an explosive force of 4.

Primed TNT will catch on fire if it is shot through lava. It can be pushed by water.

When the player primes TNT and the primed block falls into the end, the TNT block will detonate when the player enters the end. When primed TNT is directed towards a nether portal Nether portal Consists of Obsidian Nether Portal Can generate post-generation Yes, when the player builds an appropriate frame and lights it with flint and steel First appearances See History See the structure. 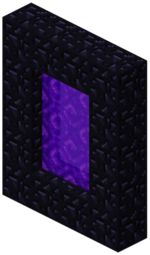 , it will only pass through said blocks and not travel into the Nether A view of the Nether. The Nether is a hell-like dimension, filled with fire, lava, and dangerous mobs. Contents 1 Accessing 2 Environment 2.1 Mobs 3 Generation 3.1 Naturally generated 3.2 Naturally created 3.3 Structures

If the TNT explodes in water, it will do no damage to blocks, but will still damage mobs. In the Console Edition, though, it does not damage mobs.

To make TNT destroy Blocks in the water, e.g. to enter an ocean monument from the top, one can place sand on the TNT before primed. The sand will fall down one block when the TNT is primed, so it is not immersed in water anymore, and will destroy the surrounding blocks.

TNT can be broken instantly with any tool, or without a tool. Be that as it may, primed TNT cannot be broken, as it is an entity. TNT will also drop when a minecart with TNT Minecart with TNT Type Vehicles Durability N/A Renewable No Stackable No Internal ID PC: 45 PE: 97 Network ID PC: 10 Entity ID tnt_minecart Drops If not exploded 1 Minecart 1 TNT Health points 6 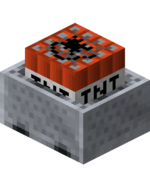 TNT is a block See the various blocks found in Minecraft. For the blocking with shields that reduces damage when performed, see Blocking. All blocks Blocks are the basic units of structure in Minecraft. Contents 1

that can be used by the player to initiate a controlled explosion A TNT explosion. An explosion is a physical event, generally destructive, that can be caused by several different circumstances. It can destroy nearby blocks, propel and damage nearby players, entities, and their armor, and cause 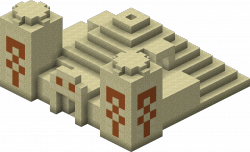 in one secret woodland mansion Woodland mansion Biome Roofed Forest Consists of See Structure. Can generate post-generation N/A First appearances See history This article may need cleanup to comply with the style guide. Please help improve this if you can.

A TNT explosion A TNT explosion. An explosion is a physical event, generally destructive, that can be caused by several different circumstances. It can destroy nearby blocks, propel and damage nearby players, entities, and their armor, and cause

TNT blocks can be activated by:

to activate TNT, it must lead directly to the TNT, or power an adjacent block.

TNT can be used in variety of traps. The simplest of them - a land mine - is made of TNT connected to a pressure plate or tripwire with redstone. One such trap generates naturally in desert temples.

TNT cannons are mechanisms that launch primed TNT into the air. Some cannons can also be used to launch other entities into the air or into other objects. 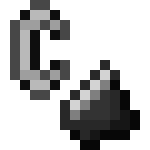 or by flaming arrows) will drop experience orbs as though they were killed by the player in regular combat.

Because they are destroyed in one hit, they can be used in spleef arenas. They work better than dirt or other materials and do not need a tool to be destroyed. This use depends on no player coming in with items that could be used to activate TNT.

Due to their destructive force, they are commonly used by griefers.

TNT uses one ID name: minecraft:tnt. It uses block data to determine whether the TNT should activate when broken or not. It also uses block states, which will replace block data in 1.13.upcoming

Issues relating to ⃢₀ₜTNT⃢₀₝ are maintained on the issue tracker. Report issues there.

TNT is detonated after being lit on fire (from Flint and Steel, for example) or from receiving an active redstone current. When using TNT in a redstone circuit, it doubles the capacitance over a repeater. There is a four-second fuse time, allowing the player to retreat to a safe distance. When initially placed, TNT does not obey physics. However, after being ignited, the TNT block becomes an Entity, and will perform a slight hop in the air before falling toward the ground, landing on the first solid block it encounters. It will flash white for exactly four seconds, during which time the player can move through it, before it finally explodes.

The explosion is easily capable of destroying most blocks in the vicinity and will blow up 70% of the vulnerable blocks around it. Fragile blocks, such as Dirt and Sand, are the most affected, while sturdier types, such as Obsidian, are more resistant to the explosion. It is a very infamous Griefing tool, as a TNT block can easily destroy most blocks besides Obsidian and Bedrock. Because of this, it is often banned on servers that don`t allow griefing.

TNT naturally generates in Desert Temples where it is used as a trap. The only other way to obtain it is through Crafting, or the menu in Creative mode.

As of 1.7 - The Update That Changed The World, players can spawn in TNT with a custom fuse time, allowing for TNT that explodes instantly, as well as TNT that takes a long time to explode.