Shields are tools used for protecting the player against attacks. 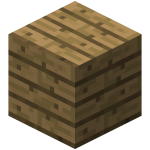 Shields are used for blocking incoming attacks. Using one causes the player to slow to a sneaking pace, and blockable attacks coming from in front of the player will deal no damage under any circumstances. When the shield blocks an attack, it takes damage equal to the strength of the attack (rounded down) plus 1. Some non-damage effects of ranged attacks (such as being set on fire by a fireball) are prevented, while others (such as being set on fire by a flaming arrow) are not. Knockback from both melee attacks and projectiles is prevented, but from explosions not totally. When a melee attack is blocked, the attacker may be knocked back slightly (one block away).

The shield blocks any directional attacks coming from up to (but not including) 90⃂₰ away from the horizontal direction the player is facing, i.e. it covers almost a full hemisphere in front of the player. The player`s vertical rotation normally makes no difference to the direction of blocked attacks, however a player facing straight up or straight down might be unable to block attacks from any direction. Similarly, an attack coming from directly above or directly below cannot be blocked as it has no horizontal direction.

Blockable attacks include mob/player melee attacks, arrows, fireballs, thrown items such as snowballs, damage from Thorns, and some explosions (e.g. creeper explosions or TNT ignited by another player are blockable, but not TNT ignited by yourself or by a redstone mechanism).

If attacked by an axe, use of the shield may be disabled for 5 seconds. The shield also does not block for 0.25 seconds after being selected.

When hit by an arrow, the arrow can ricochet off the shield and hit other entities.

Unlike with banners, shields cannot be repainted or washed in a cauldron. Shields have only half the resolution of banners, making patterns look slightly different. In the game files, the pattern textures can be found in a separate directory called entity/shield.

Shields with patterns can also be obtained using the same commands as banners, except banner has to be replaced with shield.

Issues relating to ⃢₀ₜShield⃢₀₝ are maintained on the issue tracker. Report issues there.