Hero Power Anduin Wrynn with the basic priest Hero Power Lesser Heal A Hero Power is a special ability displayed to the right of each hero s portrait. Usually Hero Powers can be used once per turn and

`s basic Hero Power Anduin Wrynn with the basic priest Hero Power Lesser Heal A Hero Power is a special ability displayed to the right of each hero s portrait. Usually Hero Powers can be used once per turn and

This Hero Power can be used to kill a low Health Minion, remove a Divine Shield from a minion, or just as direct damage to your opponent`s Hero(which is usually never ideal due to the Mana cost to damage ratio, although often found in the early game when the Mage has nothing else that can be played).

This ability is also useful in activating Enrage effects of your own minions, and the Acolyte of Pain`s effect, although in the case of the Acolyte it can be somewhat mana inefficient to do so.

While at first glance Fireblast may seem weak compared to some of the other Hero Powers, it in fact possesses many unique advantages. Its ability to directly target minions or heroes makes it extremely useful for picking off vulnerable yet valuable targets, hidden behind a wall of Taunts. It can also be used to conveniently destroy damaged yet powerful minions, or obstructive enemies such as Mirror Images Mirror Image Set: Basic Type: Spell Class: Mage Cost: 1 Abilities: Summon, Taunt Tags: Taunt-generating Summon two 0/2 minions with Taunt.Oh hey it s Mirror Image! !egamI rorriM s ti yeh hOSee this card on Hearthpwn data page] 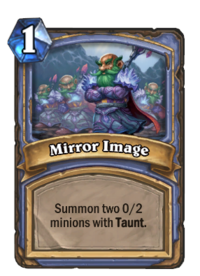 , preventing damage next round or opening the way for your own minions to attack their preferred targets. Since Fireblast deals only a single point of damage, some strategy is needed to ensure that that point is applied where it is most effective. 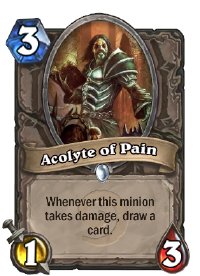 , or Enrage An Enraged minion Enrage is a minion ability where the stated effect becomes active only when the minion is damaged. If the minion is healed back to full Health, the Enrage effect will be cancelled. 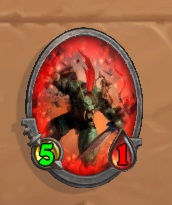 effects, for just 1 damage, making minions with these properties useful for mages.

When the mage is left with at least 2 mana to spare at the end of the round, Fireblast can be a useful mana dump, even if all it accomplishes is dealing 1 damage to the opponent hero, or reducing a minion`s health by 1.