Gormok the Impaler can be obtained through The Grand Tournament "From east to west, heroes are sent, seeking glory in the greatest of events... there are knights on noble steeds; those who will bring them to their knees; there are monsters to test their mettle 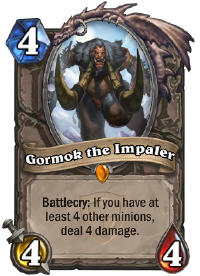 Battlecry: If you have at least 4 other minions, deal 4 damage.

Gormok has been giving impaling lessons in a small tent near the tournament grounds. For only 25g you too could learn the fine art of impaling!

Gormok the Impaler is a legendary Rarity is a rough measure of the quality and scarcity of a card. Cards of higher rarity are typically more powerful and more useful, but are harder to find and more expensive to craft. There

With slightly below-average stats for its cost, Gormok the Impaler should only be put in your deck if you plan to make use of its powerful but tricky to activate Battlecry Battlecry is an ability where a particular effect activates when the card with the Battlecry is played directly from the hand. Although mostly limited to minions, some weapons also have Battlecries. Activation of Battlecries are . Best used with decks/classes that like to flood the board such as Warlock The  Warlock is one of the nine classes in Hearthstone: Heroes of Warcraft, represented by Gul dan. Heroes edit | edit source] Contents 1 Heroes 2 Background 3 Hero Power 3.1 Replacement Hero Powers 4 Strategy

, Shaman The  Shaman is one of the nine classes in Hearthstone: Heroes of Warcraft, represented by Thrall and Morgl the Oracle. Contents 1 Heroes 2 Background 3 Hero Power 4 Strategy and gameplay 4.1 Counters 5

, and Paladin The  Paladin is one of the nine classes in Hearthstone: Heroes of Warcraft, represented by Uther Lightbringer and Lady Liadrin. Heroes edit | edit source] Uther Lightbringer is the standard hero for paladins. Players who

. ` Sticky Sticky is a term used to refer to minions which are hard to remove from the battlefield, in general due to Deathrattles which summon other minions. Strategy edit | edit source] Sticky minions can be 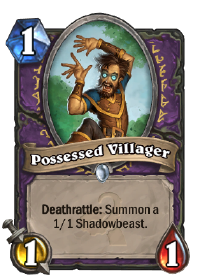 ` Deathrattle A Loot Hoarder displaying the Deathrattle icon Deathrattle is an ability where the stated effect occurs when the minion or weapon is destroyed. Cards with Deathrattle appear with a skull and crossbones when in play. 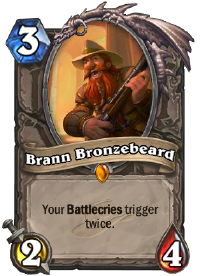 in a control deck as a strong finisher to deal 8 damage for 7 mana.