Cactus can be mined by hand without taking damage. The tool used to mine the cactus does not affect the speed at which it is mined.

When the spot a cactus is placed in becomes unsuitable, such as when a solid block is placed next to them or their supporting block is removed, the cactus block will uproot and will drop as an item.

A cactus will also be removed and drop itself as an item if a piston Piston Transparency Yes Luminance None Blast resistance 2.5 Tool Any tool Renewable Yes Stackable Yes (64) Flammable No Drops Itself Data values See Data values Pistons are blocks capable of pushing most blocks, depending on

tries to push it (trying to pull it does nothing) or moves a block into its space. A cactus is a plant Plants are Minecraft s representation of plant life. They do not move, but some can grow and spread under the right conditions. Most plants can be planted and farmed. The growth of some plants may be

that occurs naturally in dry areas.

Cacti naturally occur in desert and mesa biomes A river bisecting a jungle biome. At the top right is a forest. A river running through a mesa biome with mesa plateaus, with a savanna biome in the bottom right. “ In case you

. They generate as one (11⁄18 chance), two (5⁄18 chance), or three (2⁄18 chance) blocks tall. Rarely taller cacti can be found if generation chooses to generate another on top of one already generated (although not as commonly as sugar cane).

Cacti naturally grow to a height of three blocks, adding a block of height when the top cactus block has received 16 random ticks Nearly all video games (including Minecraft) are driven by one big program loop. Just as every gear in a clock is synchronized with the pendulum, every task involved in advancing a game simulation is synchronized (i.e. on average every 18 minutes, but the actual rate can vary widely). Bone meal Bone Meal Type Wool dyes Durability N/A Renewable Yes Stackable Yes (64) Data value dec: 35115 hex: 15F15 bin: 10101111115 Name dye 15 Bone meal is a material that can be used as a dye as well as

does not work on cacti to speed its growth. A cactus does not need light Light (or lighting) in Minecraft affects visibility, mob spawning, and plant growth. Contents 1 Brightness 1.1 Spread 2 Sources of light 2.1 Blocks 2.2 Other 3 Light-filtering blocks 4 Effects of light 4.1 Mobs 4.2

to grow and is non-flammable. If a cactus has space directly above it, it will grow even if the newly-grown block will immediately break due to adjacent blocks. or another cactus block. A cactus will break itself (and drop as an item) if any block with a solid material See the concept of what blocks are made of. For items, see Category:Raw materials. Materials in Minecraft classify blocks into different types, more or less indicating what the block is "made of".

, or lava, is in any of the 4 blocks horizontally adjacent. It will also break if on sand and the block above is water or lava.

When any entity A player standing in front of a large group of entities The hitboxes of several entities. Note the blue line which points to the direction the entity is "facing." Entities encompass all dynamic, moving objects

, touches a cactus, 1 () damage See damage in Minecraft. For information on health/hearts, see Health. Damage represents injury from attacks or natural causes. Players and mobs in Minecraft each have a supply of health points, which are

, but touching it also damages the armor. Mobs will not avoid cacti when they pathfind, making them good for trap and farm design.

Cacti will also destroy any items that come into contact with them, including cactus blocks harvested above them.

will pick it up faster. 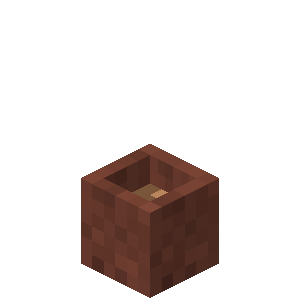 , where it is rendered harmless.

) and a full block in height, however the collision box Comparison of the solid stone and liquid water blocks Solid blocks are a category of block. Contents 1 Properties 2 List of solid blocks 2.1 List of non-solid blocks 3 Height 4 Video 5 History Issues relating to “Cactus” or “Cacti“ are maintained on the issue tracker. Report issues there.

There are two good options for farming cacti: automatic farms and manual farms. Automatic farms can involve pistons and redstone to push the blocks which forces their gravity-affected nature to come into play. The other option for cactus farming is to simply place a block above and beside a single block of cactus, so whenever the cactus attempts to grow, the block will be destroyed because of the cactus`s inability to be adjacent to other blocks. Another good way to make a farm is to put water around a cactus and a room under the cactus in order to catch items. Players will be damaged if they go near a cactus.

Cacti will destroy any item that comes into contact with them, including harvested cacti blocks. If a player dies by cacti, it is likely that many of their dropped items will be destroyed. Therefore, making traps with cacti in order to farm resources can be less efficient. Cacti can be cooked in a furnace to make cactus green dye.

Cacti can be used to protect one`s house from monsters by: first placing two to three-block-high cacti, next put a netherrack block on the ground next to the cactus, and finally light the netherrack on fire. This is a common and simple wall which is good against all mobs. Another form of cactus defense is to surround one`s home with cacti in a wall with each cactus diagonal from the next one. This is a very efficient and easier way since it does not require traveling to The Nether or anything that might be difficult to obtain. Players can also place cacti in flower pots; this way they will not hurt the player, and players will not need to worry about them being next to a wall.