Starving Buzzard x 2 are a reward for raising a hunter to level 4.

Starving Buzzard is a reward for raising a hunter The  Hunter is one of the nine classes in Hearthstone: Heroes of Warcraft, represented by Rexxar and Alleria Windrunner. Contents 1 Heroes 2 Background 3 Hero Power 4 Strategy and gameplay 5 Counters 5.1 Secrets

Ideally the goal in playing a Starving Buzzard is to then summon other beast minions, causing you to draw as many cards as possible for maximum efficiency. The Buzzard should be protected if possible, as it is a high priority target for your opponent, especially in the early game. A great combination to set up with Starving Buzzard is to put it out as bait when you have no creatures on the field and your opponent does. Then play a Snake Trap. If your opponent tries to attack and kill your Buzzard, the trap will activate first, allowing you to draw a total of three cards before the Buzzard actually dies.

Whenever you summon a Beast, draw a card.

If you feed him, he loses his whole identity.

Starving Buzzard is a hunter The  Hunter is one of the nine classes in Hearthstone: Heroes of Warcraft, represented by Rexxar and Alleria Windrunner. Contents 1 Heroes 2 Background 3 Hero Power 4 Strategy and gameplay 5 Counters 5.1 Secrets

card, from the Basic set.

Starving Buzzard is often considered a very weak card, providing a 3/2 minion for five mana that tends to die before you can use it to draw many (if any) cards. Be that as it may, because Hunter has always been a class with very few Card draw For the game conclusion where neither player wins, see Draw Card draw is a term used to refer the process or mechanic of drawing additional cards from the top of the deck, and adding them

effects and low mana curves, it has usually seen some play simply due to lack of alternatives. 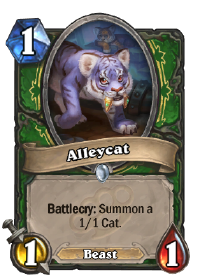 , you may be able to play several cheap Beasts while simultaneously refilling your hand. You can also combo Starving Buzzard with spells such as Unleash the Hounds Unleash the Hounds Set: Classic Type: Spell Class: Hunter Rarity: Common Cost: 3 Abilities: Charge, Summon Tags: Battlefield-related, Beast-generating For each enemy minion, summon a 1/1 Hound with Charge.You must read the name of this 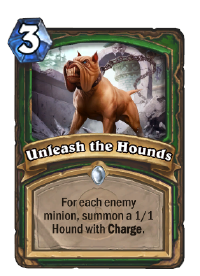 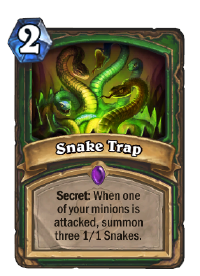 , summoning multiple Beasts at once for substantial card draw.

Buzzard combos often require having multiple cards in hand (which is difficult for a class that has few other options for card draw) and a large amount of mana (which is a problem for a class that tends to focus on aggro or mid-range play).

Alternatively, you can use an array of Hunter Deathrattle A Loot Hoarder displaying the Deathrattle icon Deathrattle is an ability where the stated effect occurs when the minion or weapon is destroyed. Cards with Deathrattle appear with a skull and crossbones when in play. 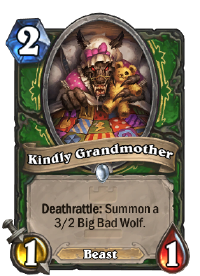 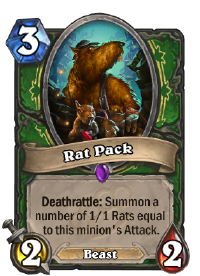 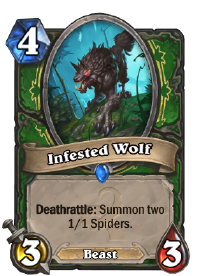 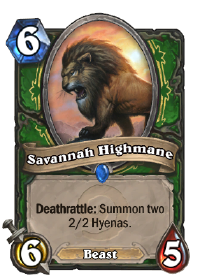 , though this is considered very weak as both cards are overly expensive and the combo can only guarantee one draw.

, both Starving Buzzard and Unleash the Hounds have seen an unusually large number of changes in order to balance their importance in play.

, Starving Buzzard only triggered from Beasts played from the hand, but was changed to trigger from any Beast summon, due to a preference to keep the function of basic The card set interface Card sets are categories into which collectible cards are divided, reflecting how they can be obtained, and determining whether they are eligible for use in Standard format. Card set does not

cards relatively simple. This significantly increased the range of combination plays, helping the Buzzard to become a key card in the hunter`s arsenal. Be that as it may, it also had the effect of restricting future design space. Because the Buzzard now triggered from any Beast summoned, the designers had to consider carefully the ramifications of introducing cards which summoned multiple Beasts, even 1/1s.

Due in part to this change, Starving Buzzard became a very powerful card, especially in combination with Unleash the Hounds. During mid- beta The Hearthstone beta was the beta test phase in the development of Hearthstone, following the alpha test. The beta test began in its closed phase in the Americas region on Aug. 16th 2013, and in

In Sep. 2014, the card saw its most drastic changes yet - from a 2 cost 2/1, up to a 5 cost 3/2. The change was made after a short but pronounced period of hunter dominance, following the full releaseAnnounce of Curse of Naxxramas "Whispers of an ancient tomb… holding horrors in every room. Ghastly ghouls, poisons galore… but in the shadows lurks something more. Knights of death and abominations… cleaving your bits for new creations. And if by 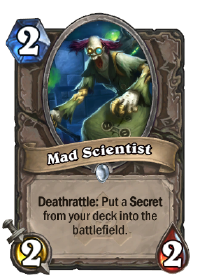 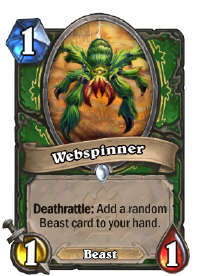 . While the developers generally prefer to solve balance issues through allowing the meta to right itself, or introducing new cards, in this case it was stated that the "back-end stats" justified direct changes to the card. In an official announcement, it was stated that the changes were intended to allow the opponent "more time to react to both the Starving Buzzard and the cards drawn by its power."