Skycap`n Kragg can be obtained through The Grand Tournament "From east to west, heroes are sent, seeking glory in the greatest of events... there are knights on noble steeds; those who will bring them to their knees; there are monsters to test their mettle 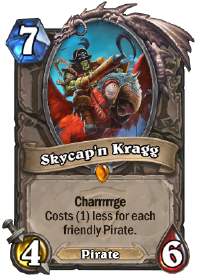 What`s more boss than riding a parrot with a jawbone for a shoulderpad while wielding a giant hook-lance-thing and wearing a pirate hat? NOTHING.

Skycap`n Kragg is a legendary Rarity is a rough measure of the quality and scarcity of a card. Cards of higher rarity are typically more powerful and more useful, but are harder to find and more expensive to craft. There 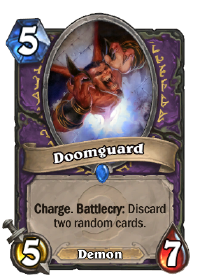 was a finisher for zoo decks A zoo deck is a deck focused around a large amount of low and medium cost minions. Zoo decks generally aim to flood the board with minions, overwhelming the opponent and achieving victory through board ). Best used when you have at least 3 Pirates on the board.