Siltfin Spiritwalker is a Wild format Wild format or Wild is one of Hearthstone s two game formats, the other being Standard format. Wild format appears in game modes in which players are allowed to play decks without the deck restrictions of 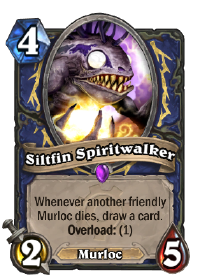 Whenever another friendly Murloc dies, draw a card. Overload A player with 1 mana Overloaded this turn, and 2 mana Overloaded for next turn. Overload is an ability which reduces the amount of mana available the next turn by the stated amount, indicated in

The elements respond to anyone who calls them for a worthy cause, even if you call them by yelling, "MRGHRGLGLGL!"

Siltfin Spiritwalker is an epic Rarity is a rough measure of the quality and scarcity of a card. Cards of higher rarity are typically more powerful and more useful, but are harder to find and more expensive to craft. There

shaman The  Shaman is one of the nine classes in Hearthstone: Heroes of Warcraft, represented by Thrall and Morgl the Oracle. Contents 1 Heroes 2 Background 3 Hero Power 4 Strategy and gameplay 4.1 Counters 5 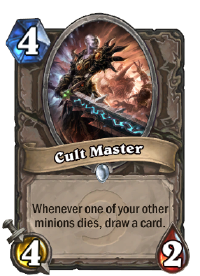 , the best time to play this card is on top of an existing field of Murlocs that you can throw into your opponent`s minions. Its high cost and Overload A player with 1 mana Overloaded this turn, and 2 mana Overloaded for next turn. Overload is an ability which reduces the amount of mana available the next turn by the stated amount, indicated in

make it difficult to follow up afterward. This could act as an alternate to Old Murk-Eye, allowing you to draw game finishing damage.