Battlecry: Summon a 2/2 Pirate and destroy all Ninjas.

Eric Dodds is a Blizzard employee, member of Team 5 Team 5 (also known as Blizzard Team 5) are the Blizzard Entertainment development team responsible for Hearthstone. A "small and nimble" team of 15 members for much of the game s original development, the team has

, and former Game Director for Hearthstone. He is featured in the credits card Credits cards are non-playable cards that depict prominent members of the Hearthstone development team. These cards are not found in play, but are displayed in random order during the game s credits, accessed through the Options

of the same name.

Since Ben Brode Ben Brode Type: Minion Rarity: Legendary Cost: 3 Attack: 4 Health: 1 Your volume can t be reduced below maximum.See this card on Hearthpwn data page] "There is no way to contain the Brode." - Yong

was promoted to Dodds` previous title of Game Director in late 2016, Dodds` position within Blizzard is currently unknown. His last known appearance was in late 2015 promoting The League of Explorers "We ve traversed the tombs of Naxxramas; we ve climbed every cliff on Blackrock. Now, the world cries out for heroes, as a new evil rises. There will be danger! There will be doom! There will be

, and he has been notably absent from subsequent promotional efforts, including Team 5`s group photos. He may still be with the team, or may have moved on to another project within Blizzard, or left the company entirely. 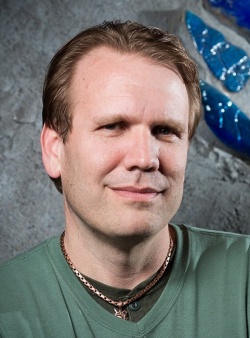 Dodds joined Blizzard Entertainment in 1997, and during his lengthy tenure with the company has served in key roles on numerous games. His first role was working on StarCraft₮ and Diablo₮ in quality assurance. Dodds then went on to serve as a level designer on StarCraft: Brood War₮ and Warcraft₮ II: Battle.net₮ Edition as well as on the strike team for Diablo II and the Lord of Destruction₮ expansion. He then joined the newly formed World of Warcraft₮ team and spent eight years serving as a systems designer. More recently he worked on the design of Diablo III before joining the Hearthstone team.

Dodds is a board gaming enthusiast who is always up for a game of Galaxy Trucker or Liar’s Dice.

Early in the game`s development, prior to the beginning of prototyping, deadlines for another Blizzard project caused all of Team 5 except Dodds and Ben Brode Ben Brode Type: Minion Rarity: Legendary Cost: 3 Attack: 4 Health: 1 Your volume can t be reduced below maximum.See this card on Hearthpwn data page] "There is no way to contain the Brode." - Yong

to be reassigned to that game. This isolation allowed the two designers to work in an even more focused way, with only the two of them to settle prototyping decisions, and were able to rapidly progress through myriad design iterations. The two went on to establish the core game still found in Hearthstone today.

For most of the game`s initial development, Brode and Dodds were the sole designers regarding card changes and balance.

Dodds was a designer on World of Warcraft World of Warcraft (WoW) is a massively multiplayer online role-playing game (MMORPG) created by Blizzard Entertainment. The game was first released Nov. 2004, and has since seen six expansions: The Burning Crusade (2007), Wrath of

, from the game`s very beginning until "a little way past" The Burning Crusade. One of Dodds` roles was as professions designer, designing all of the professions for players, including engineering. Dodds was responsible for the Gnomish Mind Control Cap, Explosive Sheep, Discombobulator Ray, Ultrasafe Transporters, Dimensional Rippers and "all the awesome, ridiculous gnomish and goblin inventions" in World of Warcraft up to that point. This was an additional reason why Dodds personally was excited to do Goblins vs Gnomes "Goblins and gnomes… goblins and gnomes! Both are super-brilliant - but you would never know! Everything they seem to make is faulty or explodes… Perfecting imperfection - goblins and gnomes!" Wild format Goblins vs Gnomes

as the game`s first expansion.