Abyssal Enforcer can also be obtained through the Highest Rank Bonus chest The 25 numbered ranks in Ranked play. Ranked (also known as Ranked Play) is the serious side of Play mode, with players able to earn special ranks to reflect their prowess in battle this season. 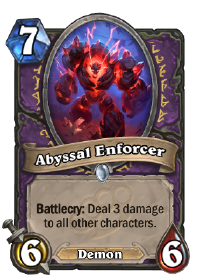 Battlecry Battlecry is an ability where a particular effect activates when the card with the Battlecry is played directly from the hand. Although mostly limited to minions, some weapons also have Battlecries. Activation of Battlecries are : Deal 3 damage to all other characters.

The Kabal print this on every package of illicit Mana Crystals: WARNING - DO NOT PUT WITHIN REACH OF ABYSSALS. THIS IS NOT APPROVED FOR USE BY FLAMING DEMONS OF ANY KIND.

Abyssal Enforcer is an common Rarity is a rough measure of the quality and scarcity of a card. Cards of higher rarity are typically more powerful and more useful, but are harder to find and more expensive to craft. There

A strong card, combining a decently sized minion with a Hellfire Hellfire Set: Basic Type: Spell Class: Warlock Cost: 4 Abilities: Deal damage Tags: Area of effect Deal 3 damage to ALL characters.It s spells like these that make it hard for Warlocks to get decent help.See 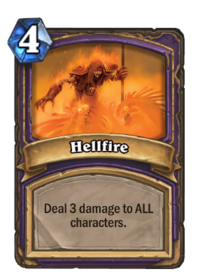 -like effect. Be careful of the self-damage, both to you and your own minions.

The Abyssal Enforcer is best suited for control A control deck, also known as a late game deck, is a deck that attempts to attain victory in the late game, through a combination of early game removal and Taunts, and powerful cards in -oriented Warlock decks, who can use its effect to clear the board and help stabilise.