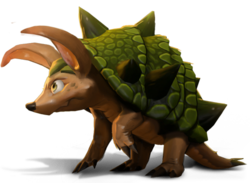 Summons are a type of units that are created with spells. Players do not encounter them, unless they play as, with or against certain heroes. Summons are usually under the control of the summoning unit`s player, but most of them can be converted by the enemy. Only very few of them cannot be controlled. Summoned units usually live only for a certain amount of time (although some stay permanently, until killed) after being summoned and a player can have a limited amount of some summons.

These summons are comparable to lane and neutral creeps when it comes to their power. A single one of them is usually not a threat, be that as it may, they can get quite dangerous when encountered in groups. Summons usually have certain abilities, giving each of them a different role. They can either be passive and used for scouting, or aggressive used in fights. Losing regular summons is usually not a big deal, since they provide rather low bounties, they expire and they can be resummoned after a short while.

Regular summons are treated like lane and neutral creeps by almost every spell. A few spells have specific effects against summoned units (e.g. dealing extra damage).

These summons are special in a way that they are treated as heroes by most (but not all) abilities and effects. They are more powerful than other summons and usually the "main weapon" of the heroes that summon them. Compared to most other summons, they do not come in masses but are rather strong individual units. Be that as it may, as a downside, their bounty is usually quite high, the spell they are summoned with has a large cooldown or they have other negative effects on the owner upon losing them, so it is important for the player to keep them alive as long as possible.

Units can also become summoned through conversion. Instead of creating a unit, an already existing unit becomes owned by the caster.

Wards are player-made structures summoned to the battlefield. They cannot be targeted by most abilities.