Neutral creeps are a type of creep not controlled by any player. They are aligned to neither of the teams, and offer an alternative source of gold “ Play Now that s how you make gold. Click to listen— Alchemist ” Gold is the currency used to buy items or instantly revive your hero. Gold can be earned from killing heroes, creeps, or buildings. Contents

and experience   Main   Changelogs     “ Play I grow stronger! Click to listen— Storm Spirit ” Experience allows heroes to level up, which makes them stronger and allows them to learn new abilities. Experience is earned

. Neutral creeps appear in small camps scattered in the jungle on both sides of the map. They come with different power levels and most of them have unique abilities. Roshan For Roshan as he appears in holiday events, see Roshan (Diretide 2012) and Roshan (Diretide 2013) Roshan Ancient Jungle Creep Level 30 Health 5500 Health regeneration 20 Armor 15 Magic resistance 55% Attack damage 65

, who sits in his den at the river, is also considered a neutral creep.

There are many different types of neutral creeps which spawn in small groups inside of camps within the jungle. These camps are categorised into small, medium, large and ancient creep camps.

Small creeps are the weakest of the neutral creeps. They give little gold and experience, deal low damage and have low health, making them easy to kill for any hero at any time of the game. Usually, jungling heroes start farming these camps before other camps.

There are 6 different types of small camps, consisting of Kobolds, Hill Trolls, Vhouls, Ghosts and Harpies. The sixth camp type is a combination of kobolds and trolls. Besides the kobold camp which consists of 5 units, all small camps consist of 3 units.

Kobolds are the smallest creeps, but come in bigger groups. They are all melee and have no abilities besides one movement speed buffing aura on the biggest Kobold. Hill Trolls are ranged creeps, with one of the 3 having an active Heal ability which it spams whenever an ally is damaged, and a mana regen boosting aura. Vhouls are also ranged creeps and have poisoned weapons, which afflicts damage over time. The ghost camp consist of 2 melee units and 1 ranged unit, which has a slowing attack. The Harpies are ranged creeps with effectively no ability. Although one of the Harpies has a very potent Chain Lightning, it never uses it.

Medium creeps are also relatively weak camps, but stronger than the small creeps. They give a bit more gold and experience, deal low to moderate damage and have more health. Some of them can be dealt with early on, but some may be too strong.

There are 5 different types of medium camps, consisting of Centaurs, Wolves, Satyrs, Ogres and Golems. The number of units varies between 2 and 4 based on the camp.

The Centaurs are melee creeps, one of them being small and the other being big. The big centaur has a small area stun, which it only uses when enough enemies are within its range. The small centaur has an aura which makes its allies more resistant against magical damage. The Wolves come in a pack of 3, with 2 of them being small and without any abilities. The big wolf is cappable of striking an enemy critically, having a chance to deal more damage on an attack. It also has an attack damage boosting aura, which makes this camp deal the most damage. The Satyr camp consists of 2 small satyrs, which are comparable to the creeps in the small creep camp power-wise, are ranged, and have a Purge ability which they never use, and 2 medium Satyrs, which are melee and have a mana burning ability which they also never use. Ogres are melee creeps which come in a group of 3, from which one has the Ice Armor ability which it never uses. Golems come in pairs, but split each into 2 smaller golems on their death. They are melee and have a long ranged stun which they do not use. 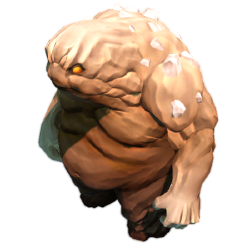 Large creeps are the strongest of the regular camps. Their gold and experience bounties per camp are on the same level as the bounty of a lane creep wave. They consist of strong creeps with strong abilities and are very difficult to deal with early on.

There are 5 different types of large camps, consisting of Centaurs, Satyrs, Hellbears, Wildwings and Trolls. Besides the Hellbear camp which consists of 2 units, all large camps consist of 3 units.

The Centaurs of the large camp are the same as the ones from the medium camp, except that the large camp contains two small centaurs and one big one, instead of one of each. The large Satyr camp is similar to the medium one. It contains the same small and medium Satyr, but one of each instead of two, and has a big Satyr, which is a strong melee creep with a strong long-ranged area nuke which it uses only if enough enemies are within range, and a strong health regen boosting aura. The Hellbears are strong creeps which come in pairs, both being melee. The big one has an area damage and slow ability which it only uses when enough enemies are within range, and an attack speed boosting aura. The small hellbear also has a magic resistance increasing aura just like the small centaurs. Wildwings are 3 melee creeps, two of them being small and relatively weak and one of them being big and able to summon a Tornado which deals area damage over time for a long duration. However it never uses that spell. Besides that, it also has an armor boosting aura. The trolls are ranged creeps, two of them being small and without abilities and the other being big, with two abilities. It can ensnare a target for a short duration, which it never does, and temporarily reanimate 2 skeletons from a nearby corpse, which it does immediately as soon as a unit dies nearby. 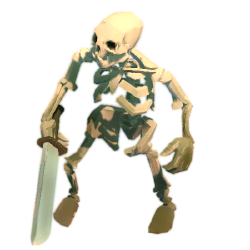 Ancient creeps are very powerful special creeps. Unlike the regular creeps, these creeps have a special unit type, the Ancient type, which makes them immune to numerous spells, such as converting spells. They are nearly impossible to deal with early on, and for some heroes even later into the game. They have very high health, deal high damage and have strong auras. They also have high magic resistance, making it very difficult to clear them with spells which deal magical damage.

There are 4 different types of ancient camps, consisting of Dragons, Hides, Prowlers and Golems. All 4 camps consist of 3 units.

The Dragons are ranged creeps but have a short attack range. There are 3 dragons, 2 of them being small and relatively weak and one big dragon. The small dragons have no magic resistance and abilities, making them the weakest ancient creeps. The big dragon has 3 abilities: It is able to spit a fireball which engulfs a target area in flames, dealing damage over time, a passive splash attack which causes each of its attack to deal area damage, and a stacking armor boosting aura. The Dragon never uses its Fireball ability. The Hides are, similar to the dragons, ranged creeps with a short attack range. Also similar to the dragons, it consists of 2 smaller Rumblehides, and one bigger Thunderhide. But unlike the dragons, all 3 of them have high magic resistance. The Thunderhide also has 3 abilities: It can slam the ground, dealing area damage and slowing hit enemies, it can temporarily frenzy an ally, boosting its attack speed significantly and it has an aura which boosts attack damage and attack speed of nearby allies. The Thunderhide never uses the Slam ability, but does cast Frenzy on itself. The Golems are strong melee creeps. One of the three golems is stronger than the other 2, having much more health and a bit more damage. The big golem also has an aura which increases the health capacity of nearby allies,

Neutral creeps spawn for the first time at 00:30, will spawn again at 01:00, and then spawn every 2 minutes (03:00, 05:00, etc.) if the camp is empty. If there is a unit present within the spawn box, the camp is spawn blocked and new neutrals will not spawn. The spawn box is an invisible rectangle which checks for units within its boundaries. Holding ALT can reveal spawn boxes. If there are no units present within the box, new neutrals will spawn. A neutral camp will never spawn the same set of neutrals twice in a row.

A Lane Creep killed by a neutral creep will grant 50% experience.

Any hero that dies to Neutral creeps will have a respawn penalty, with a minimum respawn time of 26 (equal to level 6 respawn time). This only affects early game jungling.

On average, a small camp yields 76 gold and 133 experience.

On average, a medium camp yields 100 gold and 180 experience.

On average, an ancient camp yields 234 gold and 355 experience. Most ancients are have 70% Magic Resistance. In addition, there are some spells that are restricted from working on them.