Rage: Undispellable.
The madness and brutality of N`aix makes him a vicious and unrelenting foe in combat.

W
F
Ability
Passive
Affects
Enemies / Self
Damage Attack damage is the amount of damage a unit is dealing with an unmodified basic attack; the base values are different for every hero. The total attack damage of a unit is the sum of

Physical
Lifestealer`s attacks damage enemies and heal himself for a percentage of his target`s current health.
Enemy Current Health as Damage/Lifesteal: 4.5%/5.5%/6.5%/7.5%
After escaping from his cell in Devarque, N`aix subsisted on flesh and bones of those unfortunate to cross his path.

Slow persists and heal works if debuff was placed before spell immunity and when not dispelled.
Modifiers

Open Wounds: Dispellable with any dispel.
Fresh wounds and the scent of blood often draw out the scavengers to finish the job.

Play
R
T
Ability
Target Unit
Affects
Self
Damage Attack damage is the amount of damage a unit is dealing with an unmodified basic attack; the base values are different for every hero. The total attack damage of a unit is the sum of

Magical
Lifestealer infests the body of a target unit, becoming undetectable inside. He can then explode from the host body, dealing damage to nearby enemies. If the infested unit is an enemy creep or a neutral creep, he can take control of the unit`s ability to move and attack, and when consumed the creep will heal Lifestealer`s health equal to the creep`s current health. Does not work on enemy heroes.
Cast Animation: 0.2+0
Cast Range: 150
Damage Radius: 700
Damage Attack damage is the amount of damage a unit is dealing with an unmodified basic attack; the base values are different for every hero. The total attack damage of a unit is the sum of

Infest Effect: Undispellable.
With this infestation, N`aix consumes the life blood of the host, restoring him back to full unholy power.

Play
R
T
Ability
No Target
Affects
Enemies / Self
Damage Attack damage is the amount of damage a unit is dealing with an unmodified basic attack; the base values are different for every hero. The total attack damage of a unit is the sum of

N`aix, the Lifestealer, is a vicious melee Attack range is the range at which a hero may perform his or her basic attack on another unit. There are two main subdivisions of attacks: melee and ranged. Attack range can be extended by Strength Strength is the attribute that grants health and health regeneration. For each point of strength a hero gets: 20 Health 0.06 Health regeneration Additionally, strength heroes also get 1 attack damage per strength point. To

whose abilities give him the power to bring down durable heroes quickly, while sustaining his health “ Play Life becomes death becomes new life. As it should be.  Click to listen— Treant Protector ” Health (also known as HP, which can be short for: health pool or health points) represents the life

by leeching the very life of his enemies.

The main role of the Lifestealer is to fulfill the job of a formidable carry, he is able to do so by restoring his life through his abilities. Feast is his passive ability and his signature, every attack he lands consumes the flesh and blood of his victim, dealing bonus physical damage while regenerating his own health. With Feast, he can munch down strong tanks. N`aix can send himself into a bloody Rage, increasing his attack speed, while granting a short period of spell immunity   Spell Immunity   Ally Interactions   Enemy Interactions     Default buff iconPlay Error sound “ Play Magic shall not prevail! Click to listen— Anti-Mage ” Spell immunity (formerly known as magic immunity) is a modifier 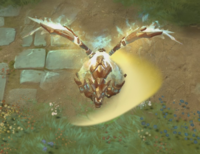 . Open Wounds tears the enemy, causing the prey`s wounds to open, bleeding their life essence, allowing Lifestealer and his allies to feast down as well as greatly slowing them to a crawl. Rage and Open Wounds allows Lifestealer to brutally rip his victim apart, feasting on their health in the process. When in need, N`aix can use Infest to hide himself inside his allies or any non-hero unit, laying dormant, until he is ready to come out, devouring the flesh from the inside, killing the non-hero unit, bursting out the chunks of flesh and bones of his unfortunate host, damaging foes around him and ambushing them with carnivorous savagery.

The Lifestealer is a monstrous beast of gluttony and greed, bent on stealing the lives of every living creature he encounters, violently killing them to sate the Lifestealer`s terrifying thirst and hunger.

In the dungeons of Devarque, a vengeful wizard lay in shackles, plotting his escape. He shared his cell with a gibbering creature known as N`aix, a thief cursed by the Vile Council with longevity, so that its life-sentence for theft and cozening might be as punishing as possible. Over the years, its chains had corroded, along with its sanity; N`aix retained no memory of its former life and no longer dreamt of escape. Seeing a perfect vessel for his plans, the wizard wove a spell of Infestation and cast his life-force into N`aix`s body, intending to compel N`aix to sacrifice itself in a frenzy of violence while the mage returned to his body and crept away unnoticed. Instead, the wizard found his mind caught in a vortex of madness so powerful that it swept away his plans and shattered his will. Jarred to consciousness by the sudden infusion of fresh life, N`aix woke from its nightmare of madness and obeyed the disembodied voice that filled its skull, which had only the one thought: To escape. In that moment Lifestealer was born. The creature cast its mind into dungeon guards and soldiers, compelling them to open locks and cut down their companions, opening an unobstructed path to freedom while feeding on their lives. Lifestealer still wears the broken shackles as a warning that none may hold him, but on the inside remains a prisoner. Two minds inhabit the single form⃢₀ₔa nameless creature of malevolent cunning, and the Master whose voice he pretends to obey.

This hero is upgradeable by Aghanim`s Scepter. The scepter grants the Assimilate ability.